Mr. Islam is the Chair of National River Conservation Commission and Former Secretary Ministry of Land and Ministry of Civil Aviation and Tourism, The Govt. of the People’s Republic of Bangladesh. He is a social activist.

He started his career in Sonali Bank in the year 1977 as senior officer & served over there under different capacities. He was posted to Sonali Exchange Company, USA as Chief Executive Officer from 1998 to 2001. Then he switched over to Mercantile Bank Limited in the year 2004 as Executive Vice President. He served in Mercantile Bank Limited for 10 years and ended as Deputy Managing Director & then he joined People’s Leasing & Financial Service Limited as Managing Director and CEO in the year 2014 as appointed by Bangladesh Bank and ended his service over there in 2017. He obtains his Ph.D from USA and in personal life he is a creative writer. Alongside his professional responsibilities he was written many articles and books especially on economic affairs.

Mr. Rahman is the Sponsor shareholder of Meghna Bank Limited. He is a prominent businessman and a social activist.

He is the Professor of Social Welfare & Research Institute, University of Dhaka. He is also the secretary of Aging People’s Welfare Association. He is a social activist as well as a social researcher. A vast number write up on various social issues is published on various national and international journals. 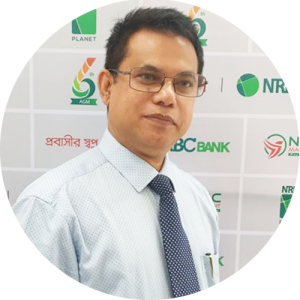 Dear Visitor,
Greetings from Ambala Foundation!
You may know that Ambala Foundation is one of the leading Development Organizations in Bangladesh which is working to facilitate happiness to millions of poor people across the country. We are very happy for your interest on visiting our activities, programs, success stories through our websites.

We always welcome suggestions, comments, criticisms etc. about the website, our programs and our works. We encourage your desire to participate with our journey.

Ambala Foundation started its journey in 1994 when the founder Mr. Arif Sikder and his friends dreamed to change the way of poverty reduction and environmental sustainability with new approaches.